Easter is coming soon and even if this festivity is well celebrated all over Italy, the Southern regions of our beautiful country show a particular affection to it.

This year’s holidays happen to be very close to other celebrations here in Italy which makes the perfect excuse to enjoy Italy at its best: the clement weather, longer daylight, spring is coming along with buzzing air and shiny colours.

What makes Easter time in Southern Italy so delightful?

Let’s dive into what makes Naples and Matera far more than the perfect destination for those who seek a bit of magic and mystery and the fascinating passionate Italian character.

Matera: celebrate Easter among the Stones, handicraft and Rupestrian Churches

The Sassi and the Park of the Rupestrian Churches of Matera have been declared a World Heritage Site by UNESCO. Matera, one of the oldest cities in the world, has been named Capital of Culture in 2019. The city’s most fascinating aspect is that it has been built as a cave in the tuff mountain and it’s today widely known as an “underground city”.

The rupestrian civilization, the ancient crypts, the Sassi and the Murgia of Matera are just some of the beautiful places that your customers can explore.

The province of Matera is so evocative that it deserves the nickname of second Bethlehem and over the centuries it’s been inspiration for writers, artists and directors – you may recall Mel Gibson’s movie “The Passion of the Christ” which is set here.

The city is extremely tied to Easter traditions and rituals, mixing in a perfect balance the festive and spiritual climate. Attending these events will be a truly unique and evocative experience, which will give emotions even to those who are less interested in the religious aspect of Easter. 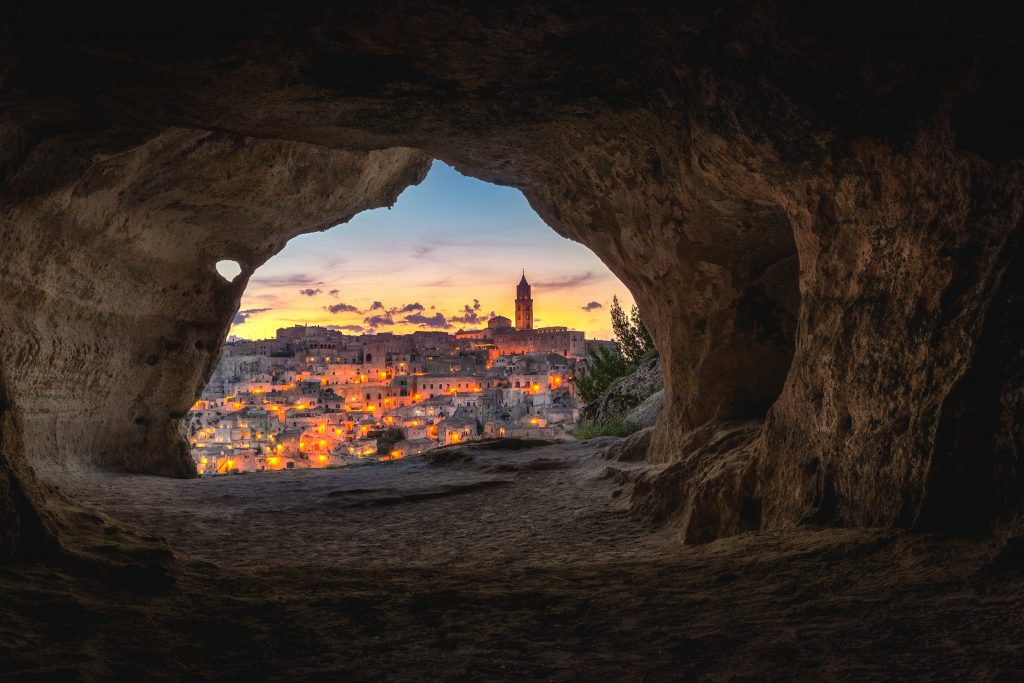 How do people in Matera celebrate Easter?

Starting from Holy Thursday, in the Sassi near the Canyon of the Gravina, the celebrations begin with a show dedicated to the Presagio, rich in nocturnal suggestions and light effects that highlight the charm of the Sassi.

The function of Good Friday is instead centered on the Via Crucis, following a path of fourteen stations that wind along the streets of the old town. During the procession, the believers, strictly dressed in dark clothes, carry on their shoulders the statues of Jesus and the Madonna accompanied by a band that performs ancient religious songs.

On Easter’s eve everyone attends the church for the mass dedicated to the Resurrection and the blessing of the Paschal Candle, a rite extremely felt by the people of Matera. It’s said that back in the days children used an object similar to an iron table called “tracca troch” to draw the attention of the citizens and gather them in the churchyard.

Not to be missed: the Rupestrian Churches in Matera

Believers or not, your customers will surely appreciate the Rupestrian Churches in Matera which are often described as jewels set in a millenary stone casket, a precious legacy of the Byzantine and Benedictine monks who settled in the area in the early Middle Ages.

Between the Sassi and the Murgia, there are 155 of them! This is a very impressive number and visitors usually have the time to enjoy the beauty of just 6 of them, which are claimed to be the most interesting, best preserved and easily reachable churches (they are set within the districts of the Sassi).

Your customers will particularly like the rupestrian Church of the Madonna di Idris, also known as the church of Santa Maria di Idris. Perched on a rocky spur of calcareous origin called Montirone (or Monterrone), this church is clearly visible from the opposite side of the old town from the panoramic square Pascoli and is the most panoramic rock church of Sasso Caveoso.

The church of the Madonna di Idris is an incredibly suggestive place: its breathtaking the panorama facing the city and the Gravina awaits visitors from all over the world to enjoy it.

The unexpected side of the Madonna di Idris

Share your experience with Rosanna, our Operator of Experiential Tourism, the expert in rock churches. Rosanna is very passionate about traditions and craftsmanship of Matera and will be happy to guide your customers in a real story to live together within the incredible setting of Matera in the experience she crafted called “The other face of the Madonna dell’Idris”.

Thanks to Artès & Rosanna, your customers will have the chance to discover this beautiful church in a unique and original way. This is an unforgettable and exclusive experience that winds through the extraordinary Sassi of Matera: your customers will explore the churches of San Giovanni in Monterrone and Madonna dell’Idris and get to know their stories, which are intimately interwoven with those of the city; they will discover and learn the secrets of the processing of tuff by an authentic master tuff master and be welcomed in an authentic house in local tuff; eventually, they will enjoy a typical lunch based on local products.

Naples: it’s simply impossible you haven’t heard of it before. You can come back a thousand times for a visit and there will always be something new to discover.

Naples is a city of contradictions, genius, and creativity, irony and folklore. Even in the Easter time, Naples does not give up its incredible personality and, in a mix between sacred and profane, it involves visitors in ancient rituals and traditions. During Holy Week there are festivals, shows, concerts, and religious events, but also markets, and midnight masses to celebrate the Easter mystery. The city accompanies its religious soul with the joys of the palate. On the tables set by Neapolitan families, there are always 2 traditional dishes: the “tortano” and the “pastiera”.

Both recipes have ancient origins and refer to pagan symbols that later merged into the Christian ones. 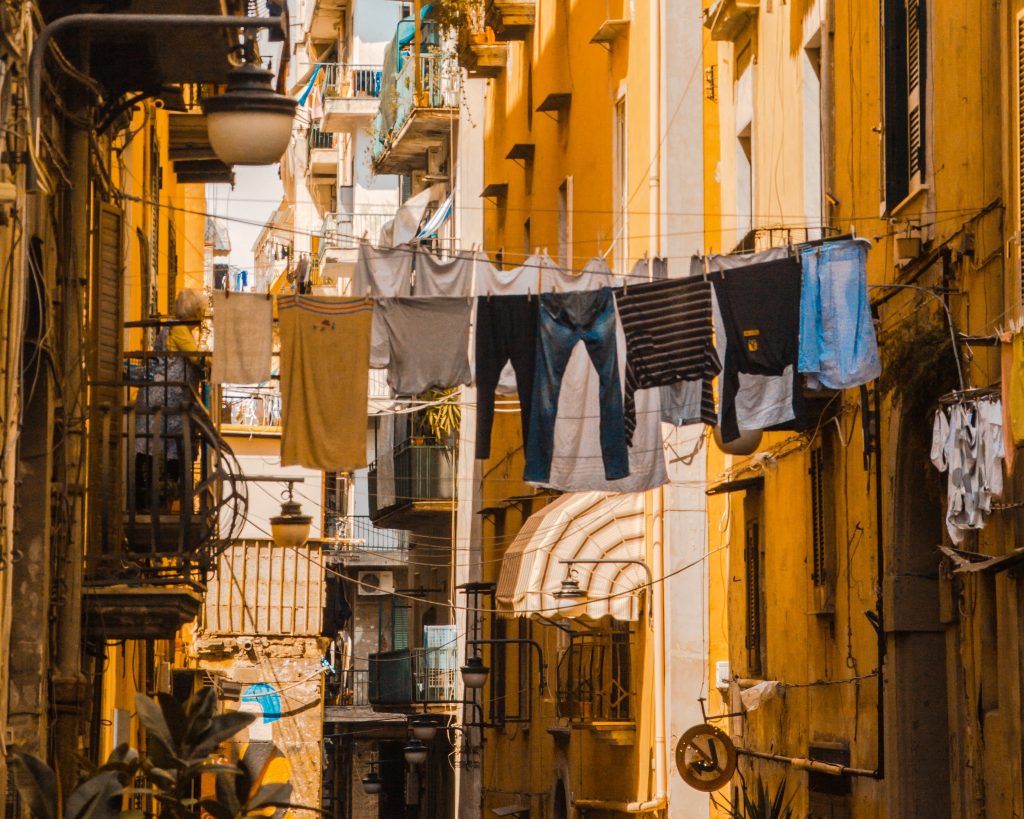 Easter in Naples: the “tortano”, the crown of thorns…

The tortano is a rustic donut and the traditional recipe was poor in ingredients. Its dough was prepared only with flour, lard, pepper, eggs and cicoli.

Each of these ingredients has a precise meaning; flour, which is also used to make bread, is the food par excellence, almost to be considered the King of food; eggs & chicks symbolize birth and they are usually compared to Jesus who rose from the Sepulchre for his new life. The cicoli are small irregular pieces of pork that are very greasy and tasty: the pig is seen as a symbol of fertility and a sign of rebirth.

The characteristic donut shape of the tortano recalls the crown of thorns and symbolizes the Passion of Christ: eating it is equivalent to assuming the value of the symbol of sacrifice and to rise from the pain felt by Jesus.

…And the “pastiera”: the mermaid’s gift

The pastiera has always been the dessert symbol of the city. The origins of this cake are shrouded in mystery and legend.

Surely, the most evocative legend is the one that sees the siren Parthenope as the protagonist. Parthenope was the founder of the city of Naples and it’s said that at the beginning of the spring, the mermaid used to sing sweet melodies to the citizens. Bewitched by her voice, the citizens decided to bring her seven gifts: flour, a symbol of wealth; ricotta (soft cheese), a symbol of abundance; eggs, which recall fertility; wheat cooked in milk, to symbolize the fusion of animal and vegetable kingdom; orange blossom, the scent of Campania; spices, a tribute to all peoples; and sugar, to celebrate the sweetness of the song of the siren.

Parthenope liked the gifts and blended them to create this unique dessert, that she used to pay homage to the Neapolitans. This legend is linked to the pagan cult of the goddess Ceres; according to the tradition around Ceres, wheat and eggs symbolize abundance, fertility, and rebirth while the water of orange blossom represents the arrival of spring.

The most reliable hypothesis is that the pastiera was created by the cloistered nuns of the convent of San Gregorio Armeno around the 16th century. Very good pastry chefs mixed the symbolic ingredients of the resurrection and the orange blossom of the garden of the convent, preparing and making pastry for the nobles and the Neapolitan upper middle class. It is said that when the servants went to pick them up on behalf of their masters, a trail of perfume escaped from the door of the convent and crept into the alleys around and, spreading into the lowlands, consoling the poor people for whom that heavenly aroma was the testimony of the presence of the Lord. Tradition has it that the pastiera, symbol of peace, is prepared on Holy Thursday, and can be kept for at least 10 days.

In both recipes, eggs play a special role as a symbol of rebirth and resurrection: it comes with no surprise that eggs are today the symbol par excellence of Easter all over the world.

The mysteries of Castel dell’Ovo

To a special egg is linked the legend of one of the symbolic places of Naples: Castel dell’Ovo which translates literally into “Castle of the Egg”.

Between an Easter egg, a pastiera and a tortano, Artès suggests you and your customers get involved into the Story to live together called “The mysteries of Castel dell’Ovo”, an experience that links the visitors together with the myths and legends of the city.

Anna, our Operator for Experiential Tourism is an expert tour guide with a great passion for Neapolitan art and culture: Anna will lead you and your customers along the clues and mysteries in a treasure hunt on the trail of princesses and saints who lived in the ancient castle.

Let your customers enjoy Easter time
with Artès’ Stories to live together!

Whether they pick The mysteries of Castel dell’Ovo in Naples or The other face of the Madonna dell’Idris in Matera,

they will surely enjoy their Easter time in Southern Italy.